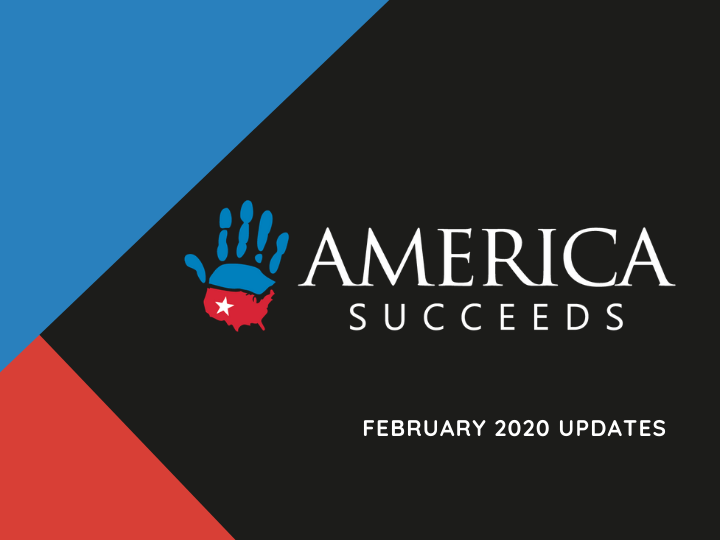 In 2019, our North Star continued to burn brightly. America Succeeds wrapped up the national Age of Agility tour in Washington, D.C. with a stellar gathering focused on collaboration and strengthening our coalition across a broad range of partners. We hosted our annual leadership retreat for affiliate directors in the mountains of Breckenridge and our 6th annual EDventure Summit in Boise was one of our strongest yet. We also added a new team member, relaunched our Grateful Ed blog with a fresh design, and released our first-ever e-book on social-emotional learning.

We made a lot of progress toward our vision of building public education systems to prepare every student to succeed in the competitive global economy and contribute to their local community. Members of our network have also been making tremendous progress in improving state policies, from increased funding and access to early childhood education to critical supports for literacy to expanding opportunities for advanced coursework, dual-enrollment credits, and work-based learning.

We’re excited to share the 2019 annual report with you, showcasing the amazing work of our affiliate partners and highlighting America Succeeds’ national initiatives.

Winning in the Age of Agility

We had to re-share content from Aligned’s weekly newsletter relating the playmaking of Kansas City Chiefs’ quarterback, Patrick Mahomes and the Age of Agility.

Idaho Business for Education’s over-arching goal is more important than ever – to have 60 percent of the state’s 25-34-year olds hold a postsecondary credential by 2025. Achieving that goal is vital to the future of the Gem State’s citizens and economy.

In Missouri, a Pre-K expansion bill was filed in the Senate. Senator Lauren Arthur-D-Kansas City filed SB 931 which expands early childhood education access across Missouri by increasing the amount of state aid districts and charter schools can claim for Pre-K. Currently, schools can count up to 4 percent of their free- and reduced-lunch population to draw down additional funds for Pre-Kindergarten programs. Arthur’s bill incrementally raises the calculation two percentage points per year over the next three years taking it to 10 percent by the 2023/24 school year. Preliminary fiscal calculations estimate that, when fully phased in, the legislation would increase the call to the state foundation formula by approximately $53 million.

In Kansas, the House Committee on Commerce, Labor and Economic Development heard HB 2507. This bill provides liability protection for business and students that participate in work-based learning. Aligned submitted testimony in support.

Thomas, the only Arkansas recipient of the award for the 2019-20 school year, is among up to 40 educators who will receive the honor during the academic year nationally.

Failing to place highly-qualified students into advanced math courses forces them into a less-rigorous academic track, creating a ripple effect that limits their lifelong academic potential. In 2018, in response to the findings in the News & Observer’s “Counted-Out” series, BEST NC advocated for the passage of House Bill 986.

The policy, which enjoyed bipartisan sponsorship, passed unanimously in both legislative chambers, and was signed by the governor requires that all students who score a level five (the highest level) on their EOG tests in math be automatically placed in an advanced math class the following year. In just one short year, the policy has had a tremendous impact on access to advanced math in North Carolina. During the 2019-20 school year, the Department of Public Instruction (DPI) estimates that as many as 10,000 talented students were given access to advanced math courses that they would otherwise not had access.

Career and Technical Education Month is well underway and Colorado Succeeds is excited about what can be done in Colorado to take CTE even farther. Their latest blog post, “Creating world-class CTE programs: Five lessons from Colorado” goes into more details. Read the post here.

We’re excited to support a growing army of business leaders across the country helping move the needle on student outcomes. #PowerofaNetwork