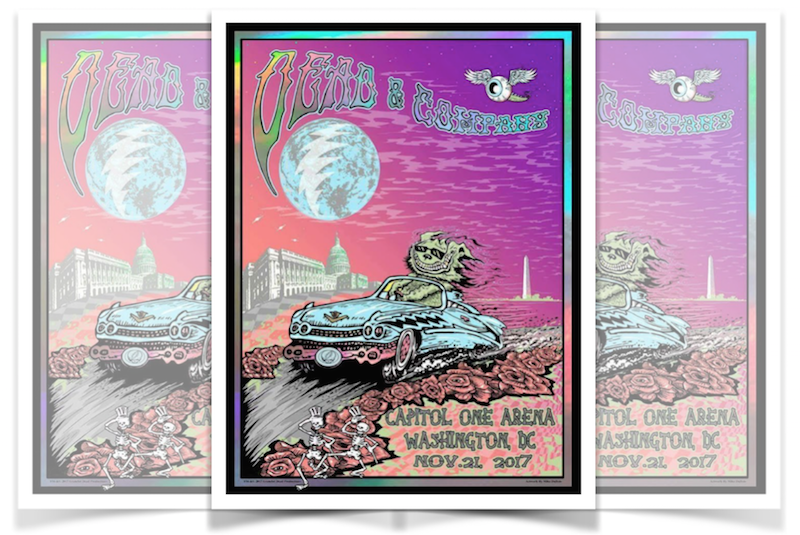 Just before Thanksgiving, Dead & Company rolled into Washington, D.C. to play Capitol One arena as part of a robust fall tour. Highly recommended if they are coming your way.

The line-up remains Grateful Dead veterans Mickey Hart and Bill Kreutzman on drums and Bob Weir up front and then Oteil Burbridge on bass, John Mayer on guitar and the phenomenal Jeff Chimenti on keyboards and piano. I’ve seen Chimenti in various configurations and he remains a win above replacement standout in any band he sits in with.

Mayer looked like he had walked off the set of Portlandia – he seemed to be wearing a carpet despite the warm late fall evening outside. But, while he lacks Jerry Garcia’s subtlety, sartorially and musically, he can play the guitar and a hot first set closing “Deal” made you imagine it was a quarter century ago if you looked at the highly engaged crowd rather than the stage.

Other first set standouts included “Bertha” and a surprisingly good vocals swapping “Ship of Fools.” Bob Weir belted out a great “Black Throated Wind” that was just one example of how strong his voice was all night. “Cassidy” also stood out and the crowd welcomed “Tennessee Jed” like the old friend it is. (And, yes, that’s the entire first set other than the show opening “Feel Like A Stranger.”)

“Help on the Way”, “Slipknot’ and “Franklin’s Tower” launched a second set that included “Terrapin” and “Days Between,” so big songs. I heard a bit of grumbling from those around us when the first notes of the “Touch of Grey” encore hit, but it wasn’t “Liberty” and it was a fun, light, and rocking version that sent the crowd off toward Thanksgiving in a great mood and wanting more.

Besides, too many kids can’t read at seventeen, one reason this blog exists.

Full setlist here.
You can listen to the show here.