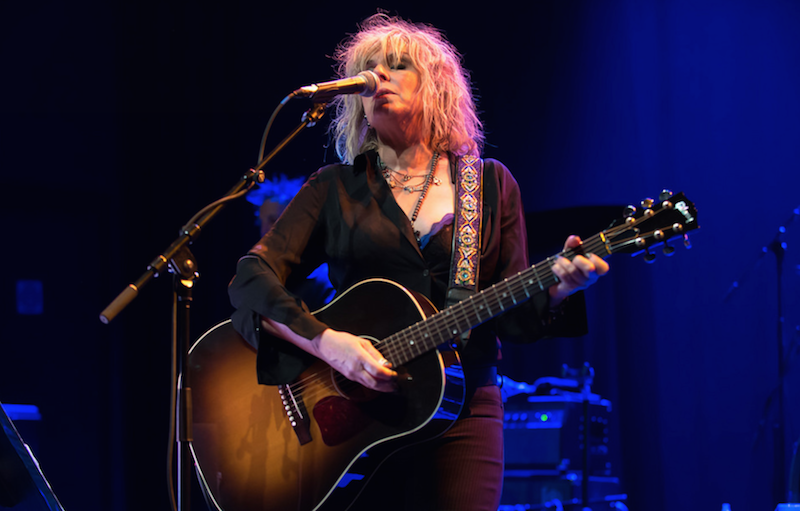 Lucinda Williams’ Sweet Old World turns 25 this year and she’s celebrating by going in the studio to cut it again and also by touring behind it with Buick 6 backing her up. The stripped down foursome has plenty of power, her timeless voice, and no gimmicks needed.

Whether modified this time around or not, the songs on Sweet Old World stand up well. Perhaps that’s the upside of Williams’ between genres persona. When you’re never quite country, not quite rock, and not quite the blues you’re never in style – but that makes it hard to go out of style as well.

Williams opened the Washington show with a walk through of Sweet Old World, all of it. She hadn’t done it before and it had a light feeling of finding your way that resonated with a general admission theater audience keen to see her and reward her with a long standing ovation after the album’s closing Which Will. The reception brought her up short and brought some emotion right to the surface.

She’s had her ups and downs, someone who didn’t just sing about 3 in the afternoon drinking. But there are deep grooves behind her art. At one point she stopped mid-song to start again because she’d mixed the song up with a different one while describing its genesis. That’s delivering it with integrity.

A cover of Tom Petty’s “Southern Accent” paid tribute to the late singer. He helped her early in her career, as she relayed to Billboard recently, and coming full circle she opened his last few shows just before his death in October.

One of two encores was her new We’ve Come Too Far To Turn Back Now, a solid anthem about progress that, following on a hot show stopping Foolishness, had a Washington crowd on its feet.

While describing a discussion with her late father, the poet Miller Williams, about lyrics in a song she noted that it gets harder to talk about things as you get older because you’ve lost more people. He passed in 2015. It’s very true, but what she still sings about is timeless. It’s the raw struggles of life – especially the people with more demons to fight or, as she says, who have to fight them even harder. And the wins and losses along that way everyone experiences and the road ahead.