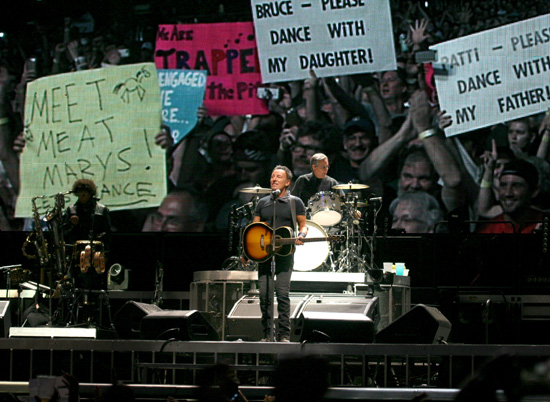 Out In The Street

All day you’ve been working that hard line

My ten-year-old daughters hadn’t been working that hard line all day. Rather, they had just spent the previous eight hours driving from Ohio in the back seat of a Honda. It was the last leg of a 9,000-mile cross country road trip. By happy coincidence the trip was ending as it had started – with some fantastic Jersey Shore music.

The first night, weeks earlier, was an evening near Asbury Park to celebrate a friend’s 50th birthday with some old and new Jersey shore musicians and bands. This time, though, it was the Boss himself at Washington’s Nationals Park. In between, we’d driven an enormous coast to coast figure eight fueled by the idea that at ten our girls should learn more firsthand about the human and natural history of America and celebrate the National Park Service’s centennial by experiencing some of its crown jewels.

Landing the trip with Bruce was irresistible. The first album I bought – vinyl – was a Springsteen album. He’s inter-generational in our family. And Bruce is very human, as his new book makes clear. Yet he’s also unlike any other. Just like the America we’d just soaked in.

We don’t go every time Bruce comes around. Ticket prices are outrageous and people paying resellers upward of a grand to listen to him sing about America’s working class is a little hard to take. A rich man in a poor man’s shirt indeed. Still, I wanted my daughters to experience the energy, the music, and Bruce’s pure unadulterated passion for playing live. He is a performer like no other and the evolving E. Street Band remains everything Bruce says it is at the end of each night. Bruce would give them a standard to measure other acts against, and you do get your (face value) money’s worth.

My wife and I enjoy live music so my daughters have seen smaller shows and private shows we host or attend to support working musicians. But this was their first full on arena concert. A different level in every way. We caught up with an old friend before the show, which made it feel a little familiar for them. Still, they kept glancing at the stage. It was far bigger than anything they’d ever seen.

Bruce opened with “New York City Serenade” with strings accompanying. A lovely song but not the kind that grabs a ten-year-old obsessed with Taylor Swift by the throat. It was more sit down than buckle up for two tired road trippers.

“Summertime Blues” woke them up though. Then “Sherry Darling” had the place rocking. A run of older classics – Hard to be a Saint, Does this Bus, Spirit in the Night, Lost in the Flood, Kitty’s Back, Incident – charmed the faithful but were somewhat lost on kids whose Bruce education basically starts with Born to Run. “Rosalita” got things rolling again and then there it was, “Put on your best dress baby…” One of my daughters had said “Out in the Street” was the song she really wanted to hear. She was immediately on her chair singing along with everyone else eyes locked on the magnetic Bruce.

I remembered that moment myself. The first time an artist you are into is actually playing that song right smack in front of you. It sticks. For me, as a teenager, it was Bob Dylan singing “Subterranean Homesick Blues.” Now she had hers. Even at ten the grin said she got it – why live music is a lot different than the shuffle feature on your ipod.

After “Out In Street” a few Born in the U.S.A. songs with a road theme sealed the deal for them on the heels of their journey.  And finally “Badlands,” their first anthem and a song they’d pumped their fists at two protesting their confinement to car seats.

Almost four hours after “New York Serenade” Bruce sent us home with an impromptu “Bobby Jean” after a ripping house lights up encore set in the rain. My daughters were exhausted but in love. There was little to complain about. If not the best Bruce show I’ve ever seen, it was certainly the most special.

It was also the end of summer and the night before the school year kicked off. Perhaps not great parenting in the get your kids to bed early sense. I guess I don’t think you’ll learn more from a three-minute record than you’ll ever learn in school, but you’ll learn something special for sure.