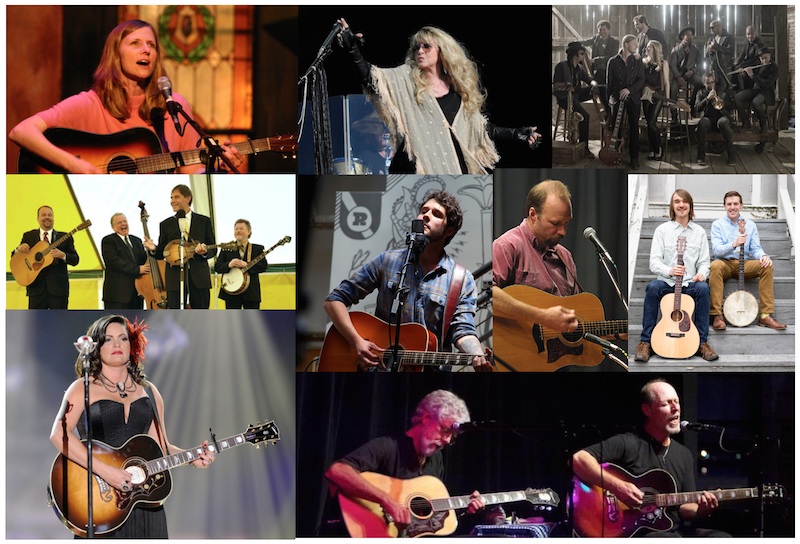 I don’t have a catchy lede or an excuse. I told Jason I’d write about some shows, but work has kept me from it. So here are some I’ve seen these past few months, and in a few cases hosted.

My wife and I host shows at an old one-room schoolhouse in Arlington, Virginia (all are welcome, email me if you’d like to be on the list for our SchoolHouse Series shows). Just before Thanksgiving we featured Tracy Grammer on a chilly fall night. Great house that got a straightforward and solid Grammer show: Songs from her time with Dave Carter, her own material, and some fantastic covers. Her stories and genuineness along with an unmistakable voice (there is a reason Joan Baez called her “distinctive and beautiful”) is why people came in from as far out as West Virginia and Pennsylvania to see her.

A week later the whole family caught Dry Branch Fire Squad at C’ville Coffee in Charlottesville, VA. It was the Saturday after Thanksgiving. Dry Branch used to play Charlottesville’s Prism on that date, the night after an annual Birchmere engagement, but with Prism now closed down this was just an off-night gig on their way through. Smaller crowd than the Prism shows, so an intimate chance to see them and get their unique combination of music history (Ron Thomason played with Ralph Stanley), American history, gently acerbic political commentary, and exceptional music you get at their shows – including some hamboning by Ron. A lot of people think bluegrass music is conservative, which ignores its roots and history. And some think it’s music played by ignorant hillbillies. The erudite Thomason, who grew up without electricity until he was 16 and has never forgotten his roots, will debase you of both of those ideas at once. They are touring through the summer.

My wife’s idea of a great birthday gift is seats down in front for Tedeschi Trucks Band. It’s mine, too. And when they came through DC and played the Warner Theater for a few nights in February we where there. I’m not sure there is a hotter or tighter live act on the road right now. Their horn section fills out the sound, Derek Trucks is, well Derek Trucks, and Susan Tedeschi’s vocals are amazing and her guitar playing gets better and better – she played a delicious “How Blue Can You Get” for the first encore. They borrow from Joe Cocker’s Mad Dogs and Englishman days and Mike Mattison is singing in front more, too, on songs like “Get What You Deserve.” It’s a big sound and American music doesn’t get a lot better than this. On tour now.

As a fun bonus, the opener was Fred Tackett and Paul Barrere from Little Feat. And Tackett’s story about playing an impromptu gig for his daughter’s elementary school class (and changing some words on the fly) gave it an educational flavor.

We were comped in March (thank you Charlottesville-based WNRN radio, a great independent radio station you can listen to and support online) for Stevie Nicks at the JPJ Arena in Charlottesville. I enjoy Fleetwood Mac but this is honestly not a show I would have paid the ticket prices for. But it was genuinely fun and drew people out of the woodwork to see her – passing Bruce Hornsby walking out of the bathroom was a good reminder of Nicks’ salience.

She does her best to make each show feel unique but it’s a canned setlist and set show. Still, it’s a pretty good canned setlist given her catalog and the stories that go with them. She can play a Tom Petty song after talking about recording with the Heartbreakers. Her fan base is strong. At a downtown bar before the show the buzz was ‘Stevie Nicks is here…” And the crowd, many of them dressed in her fashion sporting platform shoes, hats, and other garb, loved her stories even when the details bordered on the absurdly mundane. And I learned some things, too, about her life, early career, and musicians she was close with – she dedicates part of the show to Prince. Waddy Wachtel, playing beside Nicks, underscores the rich history in real time.

The Pretenders were slated to open but were sick. That marks the second time I’ve tried to see them and fate has intervened. So if you want to see The Pretenders, don’t go with me.

In April we hosted Sam Gleaves and Tyler Hughes at our SchoolHouse Series. They have a new album coming this summer and previewed some of that work as well as playing some of their solo material from previous albums. Both these guys will also scramble any preconceived notions you may have about mountain or old time music, but in delightfully subtle ways. And whether it was a light song about Tyler’s rabbit – who it turns out enjoys a presence on Instagram – or Sam’s song about the struggles of a gay miner in the West Virginia mines – the house was into it. With a bit of prompting from the audience Tyler broke out some old time dancing at one point and the show benefited the Mountain Music School that Tyler co-directs in Big Stone Gap, VA via our SchoolHouse partnership with the non-profit SpreadMusicNow. They are playing gigs all summer.

Marc Carraway, a former professional musician turned innovative high school principal opened. He’s a fixture with the Virginia-based Scuffletown but a solo-set showcased some songs you don’t always hear at a Scuffleshow.

In May, my wife and I caught Angaleena Presley at Jammin’ Java in Vienna, VA.  If you’re sick of “Bro Country” music, she’s your cure. She literally has a song mocking it, which is one reason that like Kacey Musgraves, Sturgill Simpson and others you won’t get her on what passes for country music radio today despite her time with the Pistol Annies. She’s not politically correct (though she knew better than to play “P**sy Whipped Boy” in front of a DC crowd) but her songs are as authentic as the stories that inform them. “Dreams Don’t Come True” harkens back to the days before country became homogenized and even though you’re not supposed to open shows or albums with slow waltz songs, she unapologetically does it. That’s her style, and even with her guitar struggling to stay in tune all night she delivered a solid evening.

Brian Dunne opened. He’s a quirky act. His stage presence, it might be best characterized as “light bro,” doesn’t match up with his music, some of which has real depth. His short set included a couple of gems. Hopefully he finds a groove. He’s up and down the east coast this summer and you can catch him at the Boothbay Harbor Opera House in Maine supporting Joan Osborne in July.