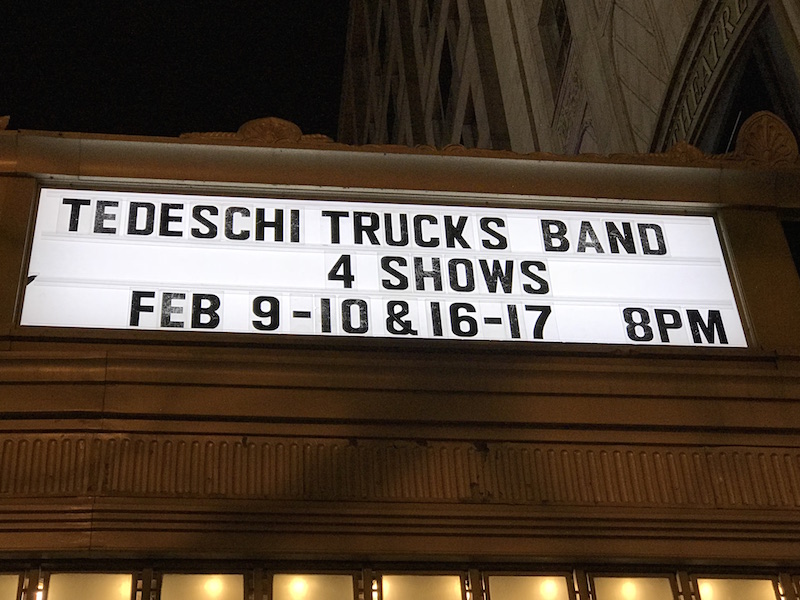 If there is a hotter live act on the road right now than Tedeschi Trucks Band, I don’t know it. Alternatively scorching and soulful, lately they are completely dialed in, loose, and delivering show after show that has even longtime fans shaking their heads.

Carrying two drummers, a horn section, and terrific backup singers, Tedeschi Trucks delivers a big sound that is southern blues rock, but in live settings bigger than that. Susan Tedeschi and Derek Trucks offer exceptional guitar work as you’d expect, and her vocals along with Mike Mattision and strong back up singers drive home the a sound that is at once derivative and unique. There are not a lot of touring bands where in one night you get great originals as well as covers ranging from Allman Brothers, Allan Toussaint, Jerry Garcia, John Prine, the Coasters, Bobby “Blue” Bland, and Derek and the Dominos and it’s just another night at the office for them.

The band seems to really enjoy playing in Washington at the Warner Theater. This particular D.C. show, part of a four night run over two-weekends, fell just after the massacre in Florida and was particularly poignant. Tedeschi, her voice cracking, made reference to the times after “It’s So Heavy.” Mike Mattision led a few songs including a raucous “Right on Time” that was followed by a ripping “Get What You Deserve.” If the first set landing Idle Wind hadn’t done it, that sequence spelled the end for any doubters in the crowd. The exceptional second set also included “Angel of Montgomery” showcasing Tedeschi’s voice along with the Grateful Dead classic, “Sugaree.” The set ended with “The Storm” into “Whipping Post” and Derek Trucks getting lost in himself and delivering the kind of performance that has made him a legend.

DC’s own Kofi Burbridge (we’ve talked about his brother Oteil here at GratefulEd before) was on keyboards and flute and he also showed up later that night, along with a few other Tedeschi Trucks members, to sit in with the Ron Holloway Band at DC’s The Hamilton for a boozy afterparty with a rotating cast of characters on stage.

Bottom line: This band is having a moment. The winter run of theater shows wraps up next weekend at the Ryman in Nashville. But they will be back out in April and are hitting amphitheaters this summer supported by Drive By Truckers and the Marcus King Band.