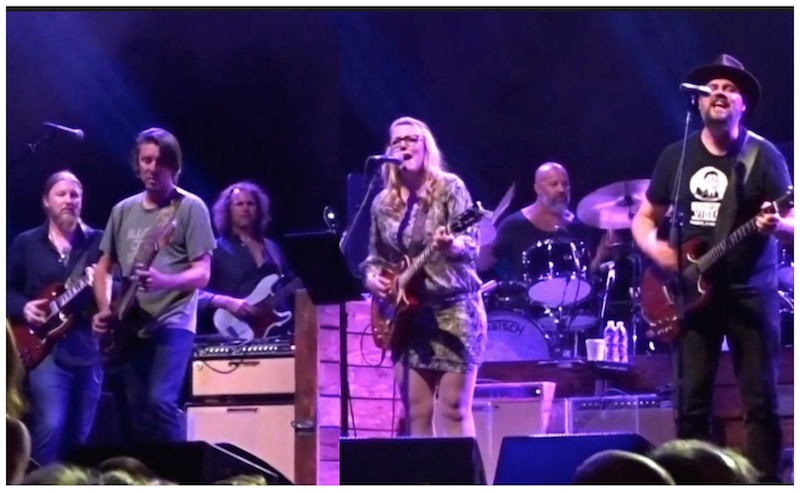 The Wolf Trap Performing Arts Center outside of Washington, D.C. is a national treasure.  The lovely amphitheater with cozy lawn seating and plenty of covered reserved seating is owned by the National Park Service. This means they’re good with patrons bringing in coolers and picnic blankets to enjoy dinner and drinks before (and during) the shows because they are not most concerned with selling you $15 beers.

Over the years the venue has evolved into hosting great rock and roll while still retaining a wide array of programming. I remember some of their early forays into edgier music, a 1989 show with the Pogues, Mojo Nixon, and the Violent Femmes ended up somewhat chaotic as ushers used to the National Symphony and orderly seating confronted a crowd that really wanted to get close to the bands.

These days it’s a well oiled machine with a great summer line up. On July 11thWolf Trap again hosted the Tedeschi Trucks Band summer tour, Wheels of Soul. The day gave way to a lovely evening with pleasant temperatures and one of those classic Virginia sunsets that eases into darkness like a gentle stain. This year’s TTB roster featured Drive By Truckers and the Marcus King Band in support. Marcus King opened the night with a rocking set. His dad is bluesman Marvin King so he has a leg up, but he’s unbelievably only 22 and has assembled a fantastic band fusing Southern rock and the blues with a forward looking sound. A prodigious talent, he read the crowd well telling a story about a party at Virginia Tech before landing his set with a rocking “Virginia.” They might have been the third band on a three-band bill but earned a standing ovation from an appreciative audience.

Drive By Truckers followed up with a strong set. Whatever the configuration of the band, Mike Cooley and Patterson Hood know how to get it done and the band worked through an earnest set. What can’t you say about a band that’s produced great Southern-infused music for so long, is socially aware, and still parties on stage? They drew a lot from “American Band,” an album that seems more resonant all the time and Hood reminded the audience as he is wont to do in the words of Patti Smith, to just “love each other motherf**ers.” Hard to argue.

Finally, TTB took the stage. I like their hard charging sound more in smaller theaters, the kind they play during the colder months rather than the summer amphitheaters. And you get more songs. But they packed a lot into a thirteen-song set. I continue to argue they’re the not-to-miss live act on the road these days. Alecia Chakour is a backup singer, c’mon! Highlights included a hot “Get What You Deserve” encore and Marcus King joining on a cover of “Key to the Highway.” Backup singer Mike Mattison sang out in front and Mark Rivers did as well.

Midway through the set a stage hand brought out sheet music and Susan Tedeschi sang “Lord Protect My Child,” one of three Dylan covers in their set. It’s a song the band had not played in a few years, only twice since 2012, and just ten times as of this writing. Beautifully delivered, it needed little explanation for a crowd looking for a few hours of escape but not amnesia from our contemporary troubles.

Photo by Andy Kahn for JamBase.com, which features his take on the show | Members Of Drive-By Truckers & Marcus King Band Join Tedeschi Trucks Band In Virginia