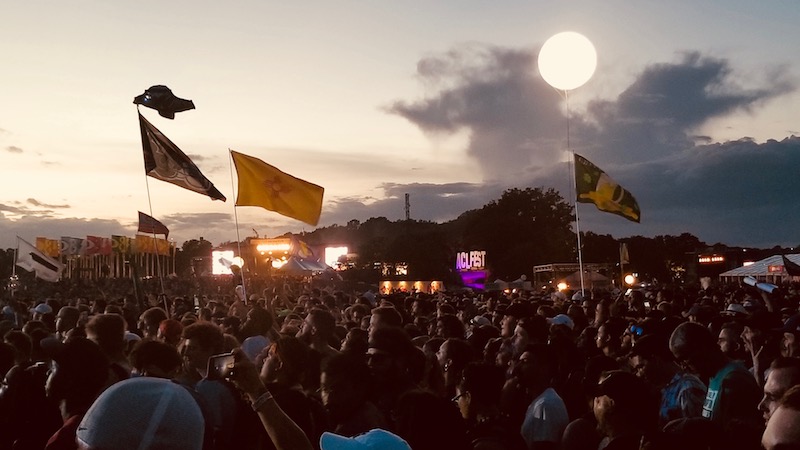 Austin City Limits kicked-off Weekend One (of two consecutive weekends) of the 18th annual music festival at Zilker Park in Austin, Texas, on October 5-7, with one of the better line-ups in recent years. Despite a 30-60% chance of rain each day, we never got more than a sprinkle and enjoyed great music and people watching in the Texas sunshine.

ACL is one of the premiere music festivals in the country dating back to 2002. The event features eight stages with music acts from almost every genre including rock, indie, folk, rap, electronic and hip-hop and over 450,000 attendees. They also do a superb job with food and drink all set against the spectacular back-drop of the Austin city skyline.

For the second year in a row, I made the trip to Austin with my teen-aged, music junkie son and his buddy, and this year my wife and daughter joined us for Day One as well. We target a few sets we don’t want to miss but much of the fun comes from catching part of a set of an unfamiliar band or a surprisingly good set by someone we didn’t think we’d enjoy.

On Day One we saw David Byrne, Greta Van Fleet, Father John Misty, Khalid, Odeza and Paul McCartney. My son and I really wanted to see Greta Van Fleet (see my previous post) and my daughter was all about Khalid and Odeza. We had to divide and conquer but met-up for the generational uniting set of Paul McCartney. At 74 years old, Sir Paul sounded fantastic and was highly entertaining. He has plenty of material to draw on from the 29 number one hits over the span of his career with The Beatles, Wings and duets with Michael Jackson and Stevie Wonder. He also has a new record out which achieved number one status on the Billboard 100 for the first time in 36 years. Somehow, he still managed to over-deliver.

We were least excited about the Day Two line-up but got a couple of nice surprises. The alternative act Naked Giants played the festival’s smallest stage early in the day and instantly won-over the crowd. My son had seen them before and flagged them for us, and I’d put them in my top three sets. We also enjoyed the Wombats, The Breeders, Blood Orange, San Holo, and Chvrches. Nelly played to the audience by wearing a University of Texas football jersey and sticking to crowd favorites including the 90’s anthem “It’s Getting Hot in Here”. Metallica were Saturday’s headliner and we stayed long enough to say we’ve seen them.

The festival grounds are enormous and on Day Three we were feeling much less ambitious in terms of long walks to catch part of a set. We warmed up with partial sets of Bahamas, and then Parquet Courts, but then settled in for three full sets back-to-back-to-back, Janelle Monae, Houndmouth, and Shakey Graves. Janelle Monae, an artist none of us knew anything about, easily carried the day. She put on a spectacularly entertaining show with a great band including a horn section, dancers, multiple costume changes, and a powerful voice with a message.

Childish Gambino was scheduled to headline Day Three but cancelled his entire tour due to a foot injury. It was disappointing because the festival organizers were clearly going for a big close and Arctic Monkeys and Travis Scott wound-up with the premiere spots on the two main stages. Nevertheless, it was spectacular three days of good fun and great live music.