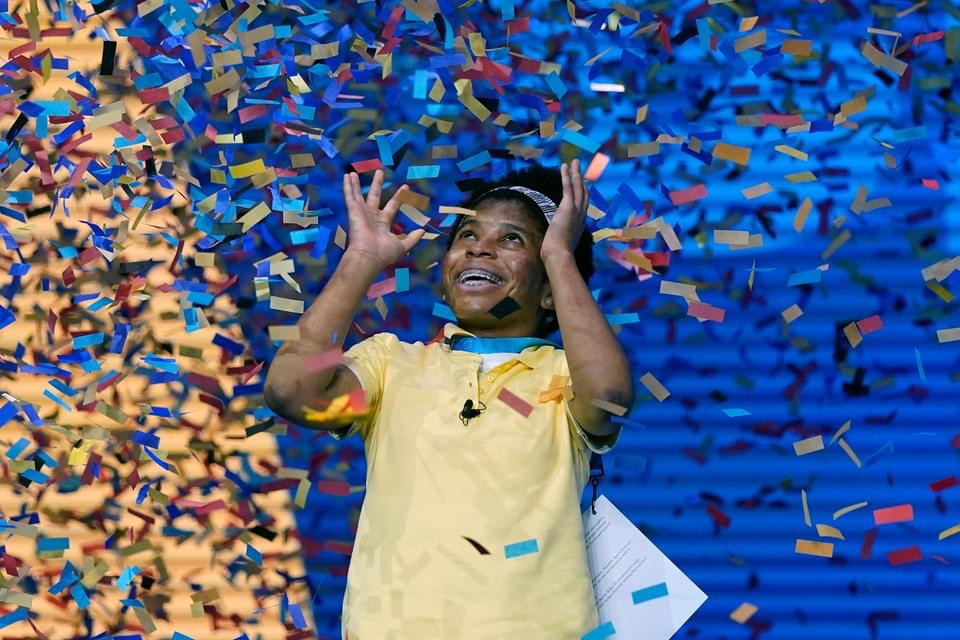 The Scripps National Spelling Bee was held over the week of July 8th, and Zaila Avant-garde became the first African American to win in its 93-year history. Her winning word was ‘murraya’, a type of tree, and she associated it with actor Bill Murray. Confetti flowed as she won the historic title.

The Bee began with 209 entrants between the ages of 9 and 15, hailing from five countries: the United States, the Bahamas, Canada, Ghana and Japan. Eleven competitors progressed to the finals Thursday night.

In order to win, Zaila had to spell words like querimonious, solidungulate, and Nepeta, which she felt was the hardest one to spell in the competition.

It felt really good to win because I have been working on it for like two years. So to actually win the whole thing was like a dream come true,” she told CNN’s New Day on Friday. “I felt like in the moment I snapped out of a surreal dream.”

The History of The Bee

In 1998, Jody-Anne Maxwell represented Jamaica as the only black winner of the Bee. However, spellers of color have faced discrimination throughout its history.

The New York Times tells the heart-wrenching story of MacNolia Cox, a 13-year old girl from Akron, Ohio, who reached the 1936 National Spelling Bee finals. On her way there, MacNolia overcame numerous obstacles and outperformed dozens of other competitors to finish in the top five spellers. The system made sure to put MacNolia at a disadvantage the whole way, including her final round.

They gave her the word “Nemesis.” MacNolia, who did not recognize it from the list of 100,000 words she had studied, misspelled it. Ms. Norris [a reporter who wrote about MacNolia’s trip to the bee] immediately protested to the judges — Nemesis, the goddess of divine retribution and revenge, was technically a proper noun and not an eligible word. But it was too late. MacNolia was out.”

85 years later, Zalia broke through. As the oldest national spelling bee in the country, Scripps National Spelling Bee said it, “has not been immune from the social issues of its times, including the long-fought battle for racial equality,” but pointed out that it takes pride in “administering an academic program that’s accessible to millions of school-age children of every race, ethnicity or socioeconomic background.”

“Our hope is that Zaila’s amazing accomplishments will be seen as an inspiration to other young people and another step forward in that cause,” the bee said in their statement.

So what’s next? How do we make sure that all students of color have the opportunity to be the next Zalia Avant-garde?

America Succeeds’ work is guided by a firm belief that education system reform can be a powerful tool in creating a world in which every student can thrive. In order to build our talent and leadership pipelines, we need to address systemic racism in our education system – its structures, policies, and practices.

What We’re Doing About It

At America Succeeds, we are:

Our Equity in Education initiative hopes to advance the policies and practices that can reverse current trends and engage business leaders to accelerate the impact that BIPOC-led organizations are having on educational equity. By taking part in this effort, employers can positively impact one of our nation’s greatest challenges in a way that is more effective and reflective of their shared concern for the future success of all students.

Sign on to support equity in education and learn how we plan to make Zaila’s story the norm for students of color.

Previous Post
Dr. Dre and Jimmy Iovine Are Set to Open a New High School in South LA
Next Post
What Does the American Rescue Plan Mean for Our States’ Schools?
Loading Comments...