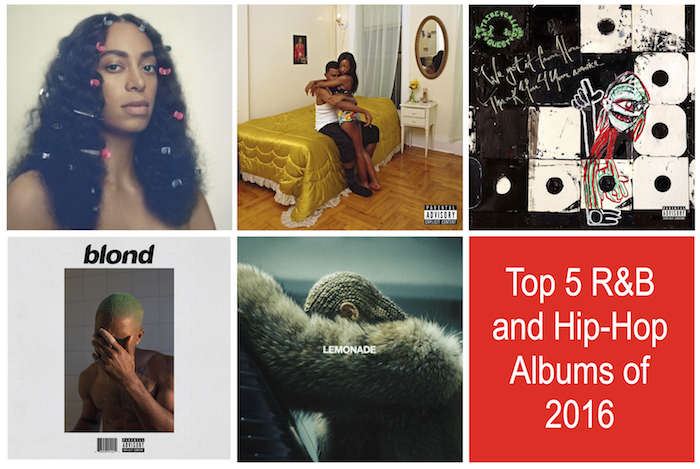 1. Solange – A Seat At The Table: Arguably the album of the year in any category, Solange’s soprano voice blends with sumptuous genre-spanning composition incorporating psychedelia and soul. Add in lyrics that are both topical and personal, and you may find yourself wondering where this album had been all your life.

3. A Tribe Called Quest – We Got It from Here… Thank You 4 Your Service: Most people, including me, weren’t aware that a 6th and final ATCQ album was even in the pipeline and, coming on the heels of an election that had many of us in the doldrums, “We Got It From Here…” as an incredible mood booster for the #NeverTrump crowd. With help from André 3000, Kendrick Lamar, Jack White, Elton John, Kanye West, Anderson Paak, and Taleb Kweli, it’s as wonderful as anything they’ve ever done.

4. Frank Ocean – Blonde: This album is meandering and it may take you a few listens to find its groove, but it’s ultimately there in a way that draws you in and has you wanting more. You probably won’t like every song, but it’s still well worth going along for the ride.
5. Beyonce – Lemonade: It’s pretty amazing how much good to great material Beyonce has pumped out over such a relatively short period of time. Some of what’s here is a little gimmicky – the sample from Andy Williams’  “Can’t Get Used to Losing You” in “Hold Up” – or generic – the umpteenth sample of Isaac Haye’s “Walk on By” on 6 Inch – but that doesn’t really spoil the fun.