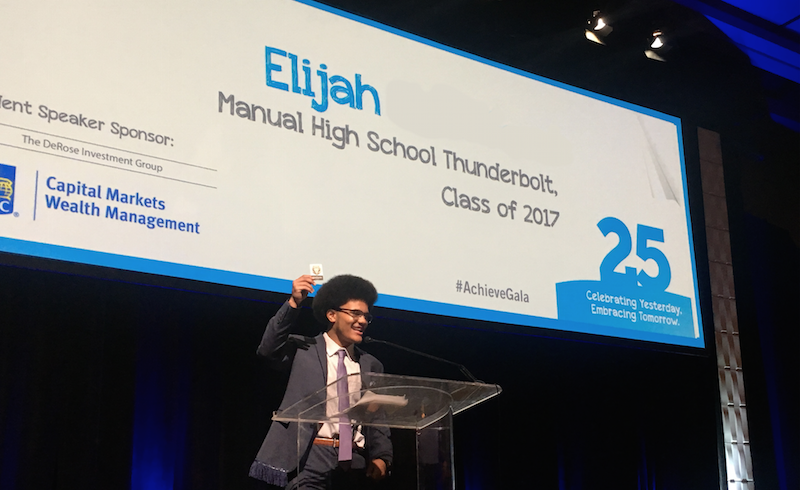 Last night, I met a young man named Elijah. He was impressive. He was inspiring. He was the keynote speaker at the Achieve Gala where the Denver Public Schools Foundation celebrates its success and raises money to support students.

Elijah is a senior at Manual High School, getting ready to graduate. He wasn’t always the best student, but really turned things around and has proven his potential. In fact, he’s been offered scholarships to attend some impressive colleges.

But last night, what he courageously told this audience of about 1,000 educators and education advocates is this: “I’ve decided not to take the traditional college path and instead pursue my passion for construction, and follow my dream of becoming a general contractor.” That’s right, he’s saying no thanks to college life.

Some may see that as a scary, risky, or even foolish thing to do. And it probably is for young folks without a better plan. But Elijah has a plan. And he understands something that too few high schoolers are aware of—there are high-paying, high-status, and most importantly, high-demand careers out there that don’t necessarily require a college degree.

More and more, as the workforce evolves, higher value is being placed on workers with the right mix of knowledge, skills, and behaviors to solve complex problems, work in teams, and think critically. Sometimes a college degree will equip you with those things. But there are other ways to get there. Certificate programs and apprenticeships are making a welcome and much-needed resurgence, and companies are embracing new on-the-job training models as well.

When I saw Elijah speak, and talked with him afterward, I was struck by how well he seemed to understand this dynamic. Sadly, so many people are under the illusion that college equals employability. Not so. In-demand skills equal employability.

As Elijah goes into his apprenticeship program, he’ll be earning money as he learns, instead of paying money. He’ll be learning by experience, not by theory. And most importantly, he’ll be living his passion. It’s a bold move, but it’s a smart one for him.

To be clear, postsecondary education and training is critical to succeeding in the modern workforce, but traditional college is just one of many ways to get the tools needed to thrive in this talent-based economy.

Down the road in a few years, when Elijah emerges from his apprenticeship program, gains real-world experience, and ultimately establishes his own company, I predict he’ll have a long line of customers seeking his service. It’ll probably include many of the newfound fans that lined up after the gala to shake his hand and salute his courage, including me.