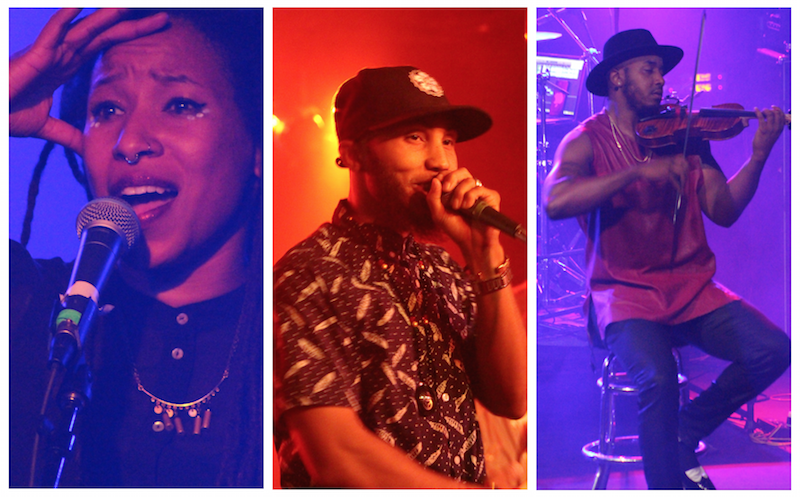 Positioning of the earth, sun, and moon were putting on an interesting show up above, while down here on Earth, some of music’s bright shining stars came into formation at Cervantes Masterpiece Ballroom in Denver.

Two nights earlier, I was at the Andra Day concert and I ran into my friends, Big Samir and Aja Black. This husband and wife duo combine to form the prolific hip-hop group known around the world as The Reminders.

True to their mission, they duly reminded me that they had an upcoming show and encouraged me to come out and see it. Easy decision. Of course I’d be there!

They are one of my favorite rap groups, and their live performance is always an exhilarating artistic rollercoaster of insights and inspiration—the kind where the musical impact doesn’t stop at the ears or even the brain, but pushes through to the heart and soul.

I posted to Facebook that I was headed to The Reminders show, which caught the attention of my friend Harold Rapp, III, who was on his way to the same venue, but to see a different show in the concert hall next door.

Playing in the main hall was Damien Escobar, the violinist whose crossover musical style is a creative mix of classical, jazz, pop, R&B, and hip-hop. Harold, for his part, is a hugely accomplished saxophonist who is living his dream; he’s made his passion into his full-time profession. He was set to meet and talk business with the headliner after the show.

The concert gods were kind to us that night, and Harold and I were able to enjoy both shows.

We watched Escobar transfix the crowd with his instrumental versatility and masterful audience engagement. The hall holds 1,000, and we were among the packed house watching in amazement as he forced a contemporary sound out of his classical instrument. It was beautifully abusive. He covered R&B hits and overlaid elegant melodies onto effusive hip-hop beats, at times treating the violin like an electric guitar, creating a sound closer to that of Carlos Santana than a symphonic concerto.

Things got personal, and painful, as Escobar interjected stories from his life. At one point, he exclaimed, “I made my first million dollars by the age of 21.” The crowd erupted into cheers, whistles, and applause. “Hold on!” he shouted from the stage, interrupting the praise fest. “I lost it all by age 22,” he admitted, causing a collective gasp in the room. He went on to describe the bitter resentment that drove him to hatefulness and homelessness, and ultimately, plummeting from celebrity status to sleeping on a couch in his mother’s basement.

Then, he told of how his daughter asked an innocent but profound question that healed his perspective and reignited his passion. She simply asked: “Dad, now what are you gonna do?” And his answer is the Damien Escobar we see today—a successful solo artist using his albums and live shows to make the most of his second chance.

In triumphant fashion, he ended the show with a rousing medley of thumping, energetic riffs to send us home on a high note.

But for Harold and me, the night was still young, as we went next door for a second dose of musical medicine.

The Reminders had just launched into their set, and already Aja Black was literally leaping into her lyrics, creating impressive distance between her feet and the stage. Big Samir’s stage presence is equal in power, but different in style. His calm and focused demeanor commands attention to the detail and intricacy of his message. They are both magnets, and one can’t help but to be drawn in.

In fact, the people went wild when the chords began to play on their catchy, crowd-pleasing hit, You Can Count on Me. The fans instinctively sang along as Big Samir assured: “If you’re afraid, I will hold you tight / then whisper in your ear it’ll be alright.” And Aja Black had a venue full of background singers as she bellowed her response: “We’re gonna make it through / always remember I’m meant for you.”

After the show, we met The Reminders back stage for a nice reunion. Harold and Big Samir are also old friends, but hadn’t seen each other in many years. After taking some pictures and relaying our love, we stepped aside to make way for the swarm of adoring fans clamoring to do the same.

As I drove home, reflecting on the evening, I couldn’t help but appreciate how things fell unexpectedly, but perfectly, into place. Most of the time, we only get to admire stars from a distance. But Big Samir and Aja Black—and Harold Rapp, III, too—are brilliant, rapidly rising musical stars who I am fortunate to experience up-close and personal, and grateful to call my friends.