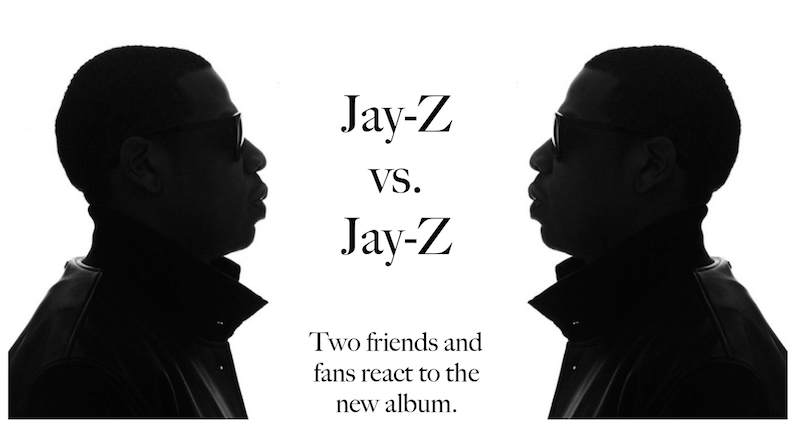 On June 30, 2017, the world began to devour and digest the thirteenth solo album by American rapper and business mogul Jay-Z. The latest addition to his expansive and impressive catalogue is 4:44, a full album released on his record label Roc Nation and launched exclusively for streaming and download on Tidal, a music sharing service partly owned by Jay-Z (availability has since expanded to include every digital storefront and streaming service except for Spotify).

While the through line of the album is both introspective and apologetic, the context for nearly all of the content was provided by Jay-Z’s wife Beyoncé, who aired the couple’s problems in her 2016 album, Lemonade. With this backdrop already in place, fans, music critics, and serious news outlets alike lapped up the salacious details of hip-hop’s reigning royal relationship.

In what seems to be a direct musical response, Jay-Z is uncharacteristically revealing, which makes the album beautifully brazen and uncomfortably shallow. Here, bold creativity and corporate calculus attempt to occupy the same place at the same time, a tension that results in the mixed feelings expressed here.

The following is an exchange with my good friend, John McClendon, a Washington D.C-based lawyer, technology guru, consultant and very serious music connoisseur. This is our thing. We dive deep. We pick apart. We analyze. We compare. We critique. But we always back up our criticism and praise with thoughtful rationale.

This is our take on the new Jay-Z album, with John showing his distaste in the first volley.

JOHN: So what do you think of Jay-Z going all Oxygen Network movie of the week on this latest album?

JASON: Not a lot to get excited about, musically. Production was dope in places. He over-stretched to sing on hooks. The weird, unintelligible ‘Jay-Z noises’ he likes to make that frequently punctuate his bars now feel like hackneyed references to his former self. Not as clever with his lyricism, but said the things that he knew fans and critics would latch onto and praise him for. It was, overall, a decidedly mediocre project. Speaking to his personal issues and mistakes, though not presented in a way that felt authentic, was still powerful in its own way. He is, still, a notable influencer and trendsetter, and on that front, injecting a little self-effacing truth telling into hip hop isn’t a bad thing. If rappers were more honest about their real life, I think that would have some value. Again, not terribly impressed with how he did it, but THAT he did it is still important. He set the Internet ablaze to ensure strong sales from the music platform he owns. Classic Jay-Z stuff. But if your most personal work to date still feels that commercial, that orchestrated, that inauthentic, then he’s right when he says: “I’m not a businessman, I’m a business, man.” I take it you were not at all impressed, and not willing to extend the grace I’m trying to give to it?

JOHN: I was not impressed, but I do agree with the significance of the act itself. Though, interestingly, I believe that he’s actually stepping on the “total honesty” stones laid by Kanye West and more recently Chance the Rapper and Kendrick Lamar. I can’t imagine Jay-Z being so “open and unguarded” in the hip hop community of yesteryear. The “I can rap about my vulnerabilities and shortcomings” acceptance is still relatively new.

JASON: Right. But yet and still as Jay-Z tries this on, he’s holding way, way back. He’s not pouring out his passionate, ugly, musically gripping truth. It’s still manicured and curated for public consumption, carefully calculated to maintain maximum favor with the fan base. It’s not from the gut, from the soul. It’s still all very heady.

JOHN: Completely. It feels like the prepared statement a celebrity is forced to read after they make some public gaffe; where you know every word has been the subject of multiple rewrites and edits and … THAT’S IT! That’s the feeling I was trying to identify; that the songs were written. Jay is famous for “never needing a pen,” which I think helps everything come across as fresh and real because it feels “off the top.” But this album felt like there was a full notebook of lyrics somewhere that he kept “working on” but he worked all the taste out, leaving us with tofu. Commercially viable, inoffensive tofu.

JASON: Precisely! He’s always been a bit formulaic, but it was okay because he (borrowing from Biggie) pretty much created the formula. The flow and sound benefited greatly from that raw style of delivery. But he cooked all the nutrients out of this album. It was shockingly bland, yes, like the aforementioned tofu (with all due respect to tofu). And yet, again, I do appreciate some of the content and concepts. The brother is talking about good credit, and investments, and family, and the hard road he took to finding fidelity. That stuff needs to be talked about, and I appreciate him for doing it.

JOHN: Agreed, and it is noteworthy that it comes from somebody of his stature in the community, even if not musically up to par with his previous work. My takeaway: angry, arrogant Jay-Z is a better rapper than regretful, apologetic Jay-Z.