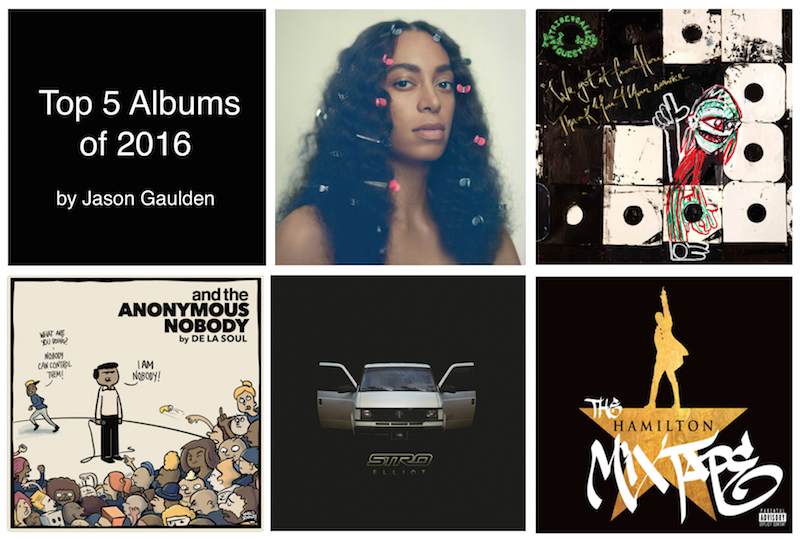 The following is a breakdown of my favorite albums of the year—and not just a list, but also my explanations of how they earned top honors.

1) A Seat at the Table—by Solange: This album knocked me off my feet. In my accounting of contemporary, high-impact soul and R&B, Solange’s name was written in pencil somewhere near the bottom of my list. And then she invited me to A Seat at the Table, and everything changed with this bold and unapologetically brazen album. Solange stuns with vocal prowess, a lyrical quilt of depth and breadth, a creative and culturally honest delivery, and thematic glue that bonds every song together in a start-to-finish masterpiece. This album, much like Lauryn Hill’s solo debut, The Miseducation of Lauryn Hill, is a highly relevant and reliable case study in the struggle, strength, and soul-song of the modern American Black woman. Consequently, Solange’s name rose way up my list and is now inscribed in permanent ink.

2) We got it from Here…Thank You 4 Your Service—by Tribe Called Quest: My greatest musical mistake of 2016 is not listening to this album until December. It was released in November, which means I wasted an entire month of superb artistic therapy and musical medicine. This final installment in the Tribe catalog—Phife Dawg, rest in peace—is the very definition of synergy: “the interaction of two or more substances to produce a combined effect greater than the sum of their separate effects.” Like the ultimate hip-hop symphony, the many guest artists effectively complement the Tribe, even as Q-Tip, the late MC Phife Dawg, and Ali Shaheed Muhammad show off their signature sound – evolved, modern, yet well-rooted in the fundamentals.

3) The Anonymous Nobody—by De La Soul: We welcome home De La Soul—back to regular rotation in the playlists of their faithful fans. I truly celebrate and appreciate their return. These are elder statesmen in the rap game—honored ambassadors—whose hard-fought and well-earned superstar status is on full display with The Anonymous Nobody. The introspection is deep, the lyrics are personal, the style is soulful, the delivery is unorthodox, and the album artfully provides a unique glimpse into the exciting lives of these hip-hop veterans. The awesome bonus to the album is a documentary that tracks the making of it—We’re Still Here (Now)—which is like a 30-minute up-close and personal hang out session with the guys. De La Soul, certified hip-hop pioneers, are still managing to innovate and inspire in the new era. Now that’s what I call keepin’ it real.

4) Stro Elliot—by Stro Elliot: This self-titled album is for music lovers. I mean that literally, not rhetorically. It’s just music—an instrumental album. To be more specific, it’s an instrumental album full of some of the most effusive and joltingly creative production I’ve ever heard. It’s a dangerous album. There have been widespread reports of necks breaking and heads exploding when listening to this album, particularly among hip-hop aficionados. For those not yet familiar, Stro Elliot is the producer that world-renowned producers point to as their favorite producer. He has a unique and masterful touch for fusing thick, rhythmic hip-hop beats with classic soul, jazz, funk, and R&B to create music melding that defies labels and categorization. He is a phenomenon—a musical mad scientist with an endless repertoire and an unduplicated style—and this album is a wonderful showcase of his masterful experiments. Maybe that’s why the album is self-titled; no one knows what genre this music fits into or what to call it. Stro Elliot is a genre unto himself.

5) The Hamilton Mixtape—by Various Artists: With a million ways to fail, producer and mixtape extraordinaire J. Period navigated the potential pitfalls of this undertaking impressively. He found himself at the helm of creating a mixtape out of Broadway’s hottest show, with hip-hop and R&B’s A-list at his disposal. All too often, these soundtrack albums start with the best of intensions, and end up being a formulaic and predictable showcase of uninspiring songs performed by superstars who are sure to move units. In addition to being clever, creative and content rich, The Hamilton Mixtape is full of intellectual lyricism; a musical ingredient too rarely served these days.