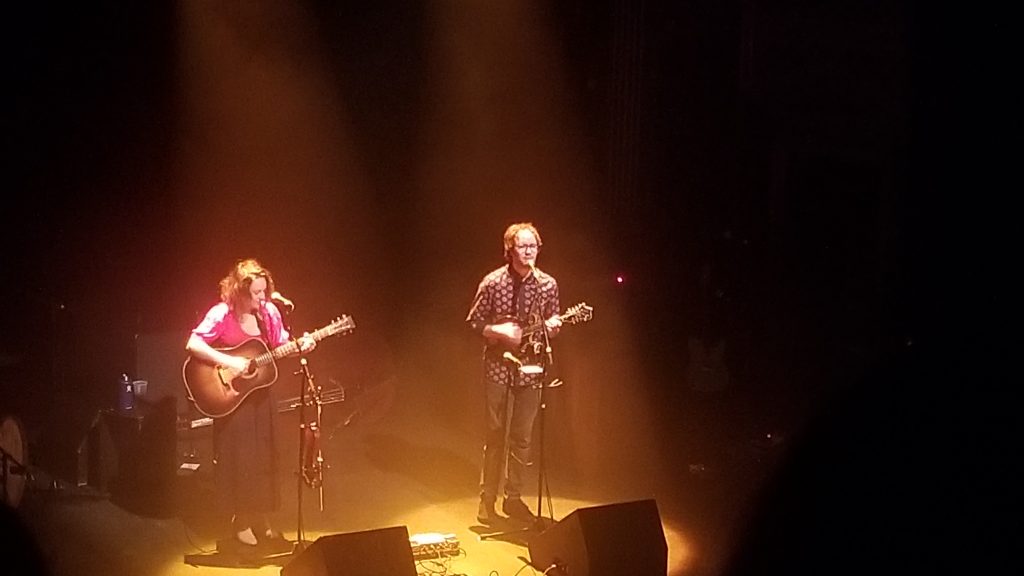 Mandolin Orange is a bluegrass/Americana/folk duo made up of Andrew Marlin and Emily Frantz from Chapel Hill, North Carolina. Now husband and wife, the couple have been playing together since 2009 and have recorded five albums.

They were joined by three touring musicians in support of their latest album, Tides of a Teardrop, which chronicles the grieving process and emotions surrounding the loss of songwriter Marlin’s mother when he was 18 years old.

Overall, the songwriting, musicianship, and harmonies are the strength of the band. Lyrically, songs like ‘Wildfire’, which follows American history from the Revolutionary War to the Civil War to the modern day south, are rich and powerful storytelling. Joseph Warren was a Boston physician who fell in the Battle of Bunker Hill after insisting on fighting as a private instead of his commissioned rank of Major General. Marlin’s hometown, Warrenton, North Carolina was named for Warren.

Mandolin Orange’s music is a staple around our house and this was our first chance to see them live. The 1,600 seat venue was sold out long in advance of the show signaling their rising popularity and increasing radio presence in Colorado.

Highlights included ‘Hey Stranger’ and ‘Old Ties and Companions’, which are superb examples of Marlin’s understated vocals contrasted with Frantz’s which seem to float above the music. A couple of mandolin jams showcased Marlin’s talent and injected some energy into the set to balance out the sad songs. My only disappointment was that they only played for an hour and fifteen minutes including an encore.

For a primer, check out their cover of Bob Dylan’s classic ‘Boots of Spanish Leather’: https://www.youtube.com/watch?v=iOHkyZ62jjQ