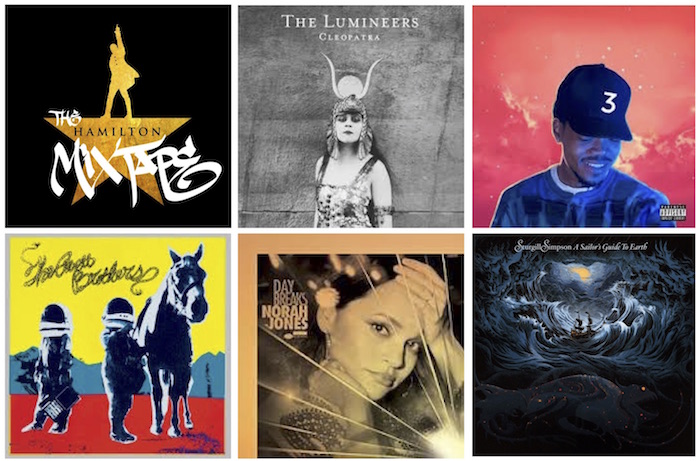 Governor John Hickenlooper, Colorado
1. One Republics – Oh My My
2. Nathanial Rateliff and The Night Sweats – EP A Little Something More
3. The Avett Brothers – True Sadness
4. The Lumineers – Cleopatra
5. Leonard Cohen –  You Want It Darker

Pat Donovan
1. Highly Suspect – hard rockers from the cape who are bringing edgy rock back! Opened for Pearl Jam in Telluride and next to PJ they were the stand out band of the event.  They are on tour in Europe until April but be on the lookout for a small venue Denver show next year before these guys get huge!

3. Parker Millsap – rising star in the  Americana music scene. Saw him in a small gritty club in DC.  He was raised in the  Pentecostal faith in Oklahoma and that upbringing has forged his soulful/soaring sound!

4. CAKE – These guys continue to be one of the best entertainers in the business. I saw them in the heart of the election and they brought in the critical issues of the election without over politicizing the show.

5. Wilco – I travelled to Chicago to see PJ at Wrigley and then Wilco the following night at the Pritzger Pavilion.  As great as the PJ show was the Wilco show was one of the top 5 shows I have ever seen in an amazing venue. They closed with an all acoustic encore of some of their best tunes.  It was my brother in laws first show and he was BLOWN away.  The heated debated on the way out of the show about the respective guitar virtuosity of Nils Klein and Mike McCready (Nils Klein gets my vote) reminded me of the arguments I had in junior high about who was better between Randy Rhoads and Yngwie Malmsteen (Randy Rhoads still gets my vote).

Honorable Mention – The Lumineers – My wife and I traveled to Austin to see them because we were out of town for the Red Rocks shows.  Our hometown band have turned into major arena rockers and it is so cool to watch the rise of their incredibly authentic style of music into the mainstream.

Charlie Barone (Best Jazz Albums of 2016)
1. Greg Abate & Phil Woods – Kindred Spirits (Live at Chan’s)
Sax greats Phil Woods (who died about a year after the recording) and Greg Abate team up with Tim Ray on piano, Mark Walker on drums and John Lockwood on bass for spirited renditions of jazz standards. A fitting farewell to Woods.

3. Norah Jones – Day Breaks
Day Breaks is not technically a jazz album – it spans a bunch of genres – but with guest appearances here by Wayne Shorter, Lonnie Smith, Brian Blade, and John Patitucci, it fits as well in the jazz category as anywhere else. Jones’ voice morphs beautifully to fit each song.

4. Hiromi – Spark
Keyboardist Hiromi may first impress you with her hard-rock caliber speed, but she brings a lot more to the music and you’ll want to stick around for some of her subtler melodic touches.

Check out our previous posts to see even more Top 5 albums and songs of 2016!