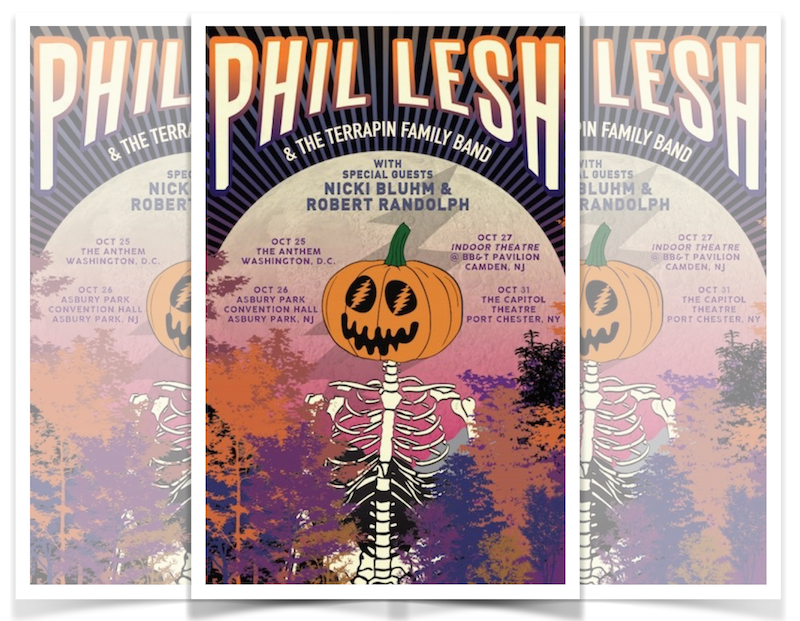 In the fall, on Thursday’s, I teach at the University of Virginia. It’s a large class, more than two hundred students, so “teacher voice” matters. Except last week I arrived more or less unable to hear. I was fighting a sinus infection and had stayed up way too late the night before down in front at the Phil Lesh show in Washington and my ears were still ringing. I owned up to my lack of volume control, and its dual causes, so students could tell me if I was yelling or whispering at them rather than pitching at the right volume. Few of them had even heard of Phil Lesh, but after class one student rolled up with a picture of her parents and Bob Weir from earlier in the month. I guess it goes to show, you don’t ever know…

Anyway, Lesh had come to Washington to kick off a few nights of what’s become known as Phil-O-Ween: A fall tour with the Terrapin Family Band, which includes Lesh’s son, and special guests. For this tour, it’s Robert Randolph on pedal steel guitar and Nicki Bluhm on vocals. Bluhm was understated but Randolph added levity and amazing sound. Even better, for a few nights, the Preservation Hall Jazz Band sits in, and plays their own stuff, too. The D.C. show at the brand-new Anthem theater was the kickoff and Lesh’s first visit to D.C. in a while.

They opened with the somewhat obscure “Mason’s Children,” followed by “They Love Each Other,” and Robbie Robertson’s “Broken Arrow.” But things got hot with a rocking “Second That Emotion” followed by “Passenger,” “What She Said” an original and first time song I think, and then an absolutely sizzling “Bertha.” “Cumberland Blues” landed the set.

The second set opened with the Preservation Hall Jazz Band joining onstage for “Viola Lee Blues” into “The Other One,” both crazy loud and funky with the horns of PHJB and then a loose cover of the Rolling Stones’ “Monkey Man” and a snappy “Throwing Stones.” After that PHJB took over altogether and played several of their songs from their new album and then Phil and Friends came back to go deep into the Terrapin suite of songs, including “Jack ‘O Roses,” a crowd pleasing “I Know You Rider” and up-tempo “Ripple” to send everyone home.

There’s nothing scary about Phil-O-Ween except that none of us are getting any younger. But at 77, Phil still brings it and he brings an obvious contagious enthusiasm for the music and a love for playing it that infects the entire band. It’s hard to miss how much fun they have playing – and how much you’ll have spending a few hours with them.