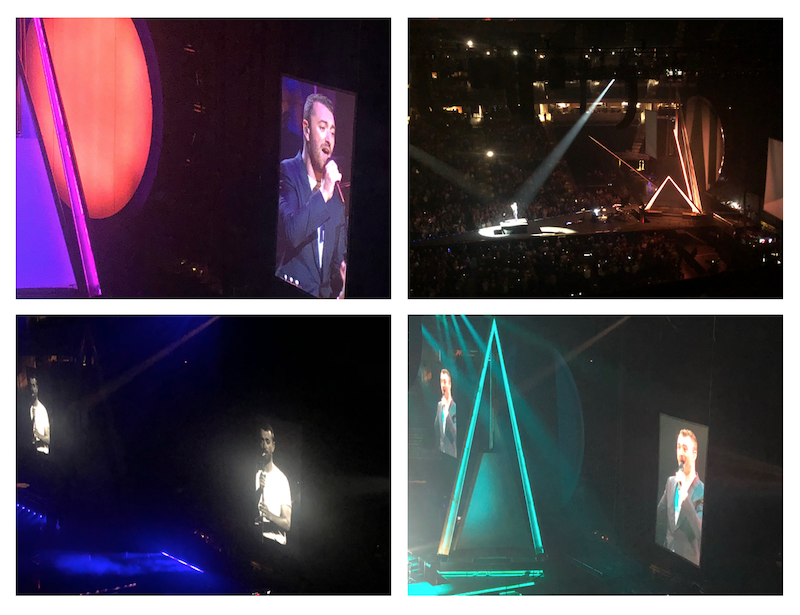 Why does Sam Smith’s pain give us such pleasure? I hate to say it, but we—yes you, too—really do relish it. We crave it. We download his pain, stream it, dance to it and sing along with it. We pay for tickets to see it on display—enough of us to fill Denver’s Pepsi Center.

Are we wrong for that?

In our defense, it’s not because we are callous or heartless. It’s really because we’re connected through experience. We’ve survived similar struggles and we can relate to the heartbreak he so beautifully captures in song.

He gets it. He’s mastered the craft of processing his tough times through a musical filter, finding some sort of inspirational aspect within it, and forcing us to reckon with that tension.

From the opening song, Burning, off his sophomore album, The Thrill Of It All, Smith set out to somehow make us roar with cheers to a completely depressing ballad. Followed by the more upbeat but still heart wrenching I’m Not the Only One, from his 2014 debut album, In the Lonely Hour.

That’s were we started, and honestly, it hurt so good.

It helps that Smith is as phenomenal a performer as he is a vocalist and songwriter, and the rest of his team’s contributions made it a full and satisfying experience. The show made me want to find a new word for backup singers, because the vocal team was comprised of four powerful, soulful, vibrant voices that are built for anything but the background. And the band was incredible—each in their own right, and even better together.

The audience was appreciative—for both the meaningful music and the humility with which Smith presented it. Between songs, he remarked how pleased and surprised he was by the crowd’s energy.

For nearly two hours, Smith performed a steady stream of familiar tunes, switching back and forth between old and new material. For the encore, he enlisted his 20,000-person choir to help sing Stay With Me, during which he ultimately quit singing lead vocals and succumbed to the audience’s friendly takeover.

He seemed genuinely touched by the enthusiasm of all of us who showed up for his therapy session. Of course it was billed as a “concert,” but c’mon, we all knew why we were there.

He gave us the musical therapy we signed up for. In exchange, we gave back applause, sing-alongs, and a rousing standing ovation. We loved it. He loved it. Fair trade.