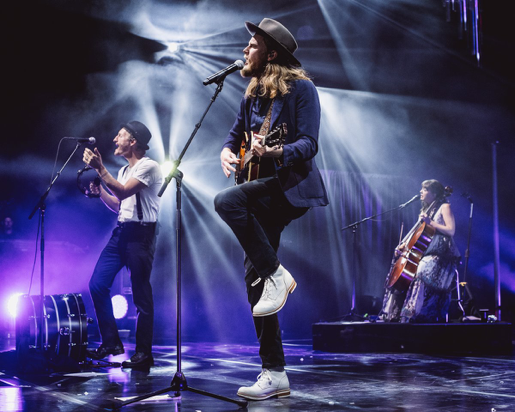 After being on the road since early last year, The Lumineers wrapped up their Cleopatra World Tour last weekend in the place where their band began: Denver, Colorado. The group had three sold-out nights at the 18,000 seat Fiddler’s Green Amphitheatre.

As the indie-folk musicians performed their stripped-down hits, they told the crowd about the inspiration behind most of their songs. They spoke of how great it was to be ending their tour in the city that gave them a chance and allowed them to become such a success. One of the most impressive things (in my opinion) about the whole show was Neyla Pekarek, their cello player. She added the perfect touch to the rawness of the singer’s voice and absolutely slayed on her solos.

Their opening acts were The Cave Singers and Andrew Bird, both indie-sounding bands who were great lead-ups to the main show. I would definitely recommend them both.