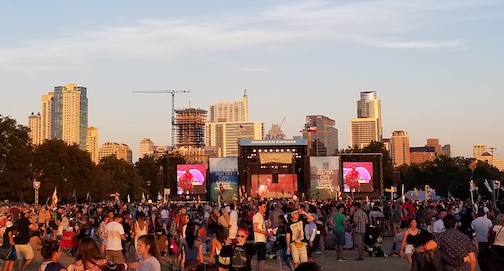 Three days of music in the live-music capital of the U.S. with my son, who is a sophomore in high school, his buddy, my brother-in-law and his wife.

Zilker Park is a Texas-sized park at the confluence of Barton Springs and the Colorado River. The grounds featured 7 stages, and all the festival amenities one would expect including beverage stations, local food vendors, beverage stations, festival merchandise and beverage stations. There were bands on multiple stages from 11:30 AM to 10:30 PM every day.

Day 1, Friday – We flew into Austin, dropped-off our bags and headed straight to Zilker Park.  We were eager to catch Eagles of Death Metal’s set. This was one of the acts we circled in red when they announced the festival lineup. I should note, the Eagles of Death Metal are not a death metal band.

You may know them best as the band that was playing the Bataclan in Paris during the November 2015 terrorist attacks. Gunmen stormed the venue and opened fire, tragically killing 90 people including the band’s merchandise manager. If you are into music documentaries, do yourself a favor and watch the HBO documentary Eagles of Death Metal: Mon Amis (Our Friends).  They lived up to our heightened expectations and played a fantastic set. It was a superb way to kick of our ACL experience.

We stopped to listen to The Revivalists, a New Orleans based 7-piece act that one hipster described to me as “a Crescent City spin on jam-band”, on our way to claim a spot up front for Ryan Adams. No one in our crew had seen Ryan Adams live but he came highly recommended and ultimately he was one of my favorite acts of the festival. He is a gifted and prolific songwriter but often characterized as brooding or even gloomy. His set was far more upbeat than we anticipated and he played all the crowd favorites and closed with a superb cover of Tom Petty’s “Even the Losers”.

We caught the opening song by The XX, fittingly named “Intro”. I only know a couple of their songs, and a couple more from the solo effort from front man Jamie XX, but Intro is the first song on a couple of my favorite playlists. It’s an instrumental but has such a rich and spacious sound they instantly had the crowd hooked.

We however, were headed all the way across the festival ground to see Jay Z. It will come as no surprise to anyone that he had the largest set design of any act of the weekend. I did not know a single song but he was entertaining.

Day 2, Saturday – We had three main targets for Saturday. Car Seat Headrest was up early in the afternoon. They are a quirky alternative act from Virginia that easily topped my son’s list as the best set of the festival. The temperature was soaring and we needed food and shade after rocking out in the intense sun.

I was unsure if the audience for Ice Cube was there because they anticipated his set was going to be ironic or cool. I assumed most of the festival going set would be too young to even remember he was one of the original gangster rappers before becoming a movie star. Either way, he acted every bit the gangsta although he has mellowed a bit with age. After performing the N.W.A. anthem, ‘Fuck the Police’, he gave a heartfelt public service announcement to respect to the police in Austin and particularly the officers patrolling the festival.

In sticking with the old-school theme, the word around the grounds was not to miss the Red Hot Chili Peppers. We staked out our space in the first 25 rows almost an hour before their set began and it was totally worth the wait. They tore through their set hitting all the classics. I am a casual Chili Pepper fan but would highly recommend seeing them live. The rhythm section of Flea and Chad Smith is easily the best of any band I have seen and added tremendous energy to the experience. Most festival-goers we talked to agreed it was the best set of the festival.

Flea, the bassist and usually shirtless showman for the Red Hot Chili Peppers had the quote of the weekend when he told the audience he attended the festival as a fan the night before they played their headlining set. He shared, “the XX touched my heart – and Jay Z touched my booty”.

Day 3, Sunday – After two full days in the Texas sun we welcomed cooler temperatures and less ambitious schedule. We kicked off the day with Whitney, a Chicago based band that has only one full-length album. It’s a testament that they were booked in the festival for an hour set with only 40 minutes of material. They filled in the time with Neil Young and David Bowie covers.

As one might expect, the sound across the festival grounds is extraordinary. We laid out a blanket more than 200 yards from the stage and still enjoyed the set by Milky Chance, a German folk rock band that has had success in the U.S. on the radio.

A number of times throughout the festival we were forced to make a decision between a couple of bands we wanted to see. In most cases the distance between stages discourages back and forth but we did manage to catch half a set each of The Growlers, a California psychedelic surf-rock outfit and White Reaper, a Louisville garage punk band. This is the real joy of a big music festival – there is truly something for everyone.

Far and away, the most surprising set of the weekend came from Portugal. The Man. We found a good spot in the thick of things and were waiting to hear a set in the vein of their radio friendly hit “Feel It Still”.  We were blown-away that their live sound borrows heavily from the bass lines of electronic and hip-hop and reminded us more of Muse than the edge of pop mainstream. Unexpected experiences like this are the hallmark of a great festival.

We put a bow on the weekend with a set by The Killers, this was the one occasion where the younger generation split-off to catch a different act  – The Gorillaz, which turned out to be the better decision. The Killers were mildly disappointing. To be fair, we were running out of steam and were pretty far back in the crowd. The sound was excellent and we were open to being inspired and charging closer to the front but the music never moved us. The set seemed to lack energy, particularly in comparison to the Chili Peppers. The Killers have a surprisingly deep catalog and they played all the good ones but there was nothing particularly special about the performance.

The kids gave us a much better review of The Gorillaz set, which featured half a dozen guest appearances. Go figure, we spent three days teaching them the ropes of a good festival experience and they one up us on the final act.