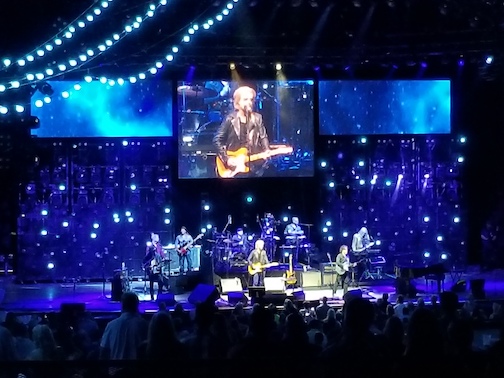 I got a last minute invitation to see Hall & Oates and Tears for Fears and my inner 80’s self couldn’t resist.  Talk about stretching out a career, Hall and Oates formed in 1970 and 47 years later they are still on tour and sold out the 19,000 Fiddler’s Green Amphitheater.

But frankly, I was more excited to hear a couple of anthems from my high school years by Tears for Fears, and they didn’t disappoint. The band sounded great even in the large open-air venue with notoriously bad acoustics. The crowd was on their feet and singing along to ‘Everybody Wants to Rule the World’ and ‘Sowing the Seeds of Love’, but they saved the best for last and closed with a great version of ‘Shout’.

Before the show started, my buddy and I discussed the fact that neither of us ever owned a Hall & Oates record but we figured we’d remember a few of the songs. Turns out, they played for over an hour and 45 minutes and only played one song we couldn’t at least sing the chorus to. In fact, they played 3 or 4 songs we knew well but had no idea were Hall & Oates songs.

After an hour and a half of nothing but hits, including the crowd-favorite ‘Rich Girl’, they capped the night with an encore that included ‘Kiss is on My Lips’ into ‘Private Eyes’ and closed with ‘You Make My Dreams Come True’.

Incredibly, they have sold 40 million records making them the third best-selling musical duo of all time. Their first hit was in 1973 and their last in 1988. In between they had 34 chart hits including 6 number one songs on the Billboard Hot 100. Who knew?